A great article about our studio on DEPARTURES MAGAZINE, november 2022 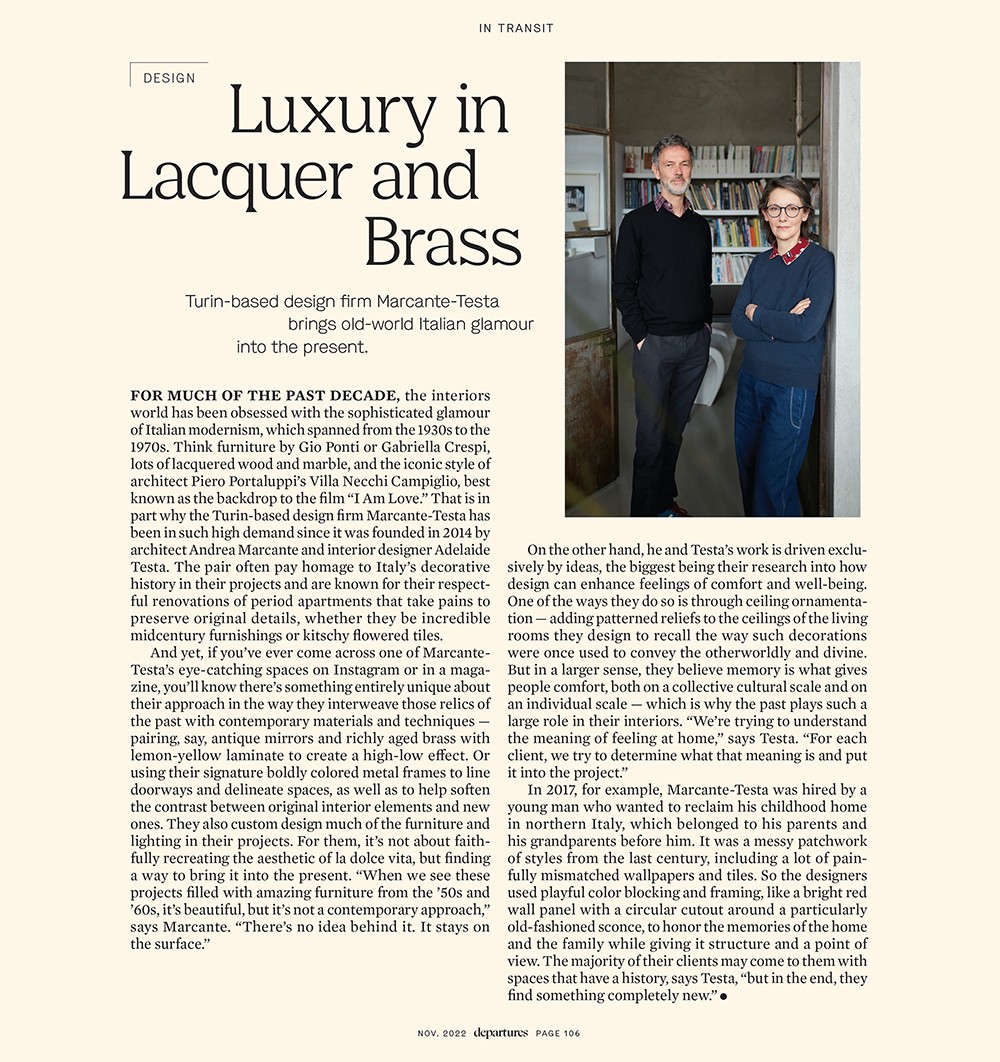 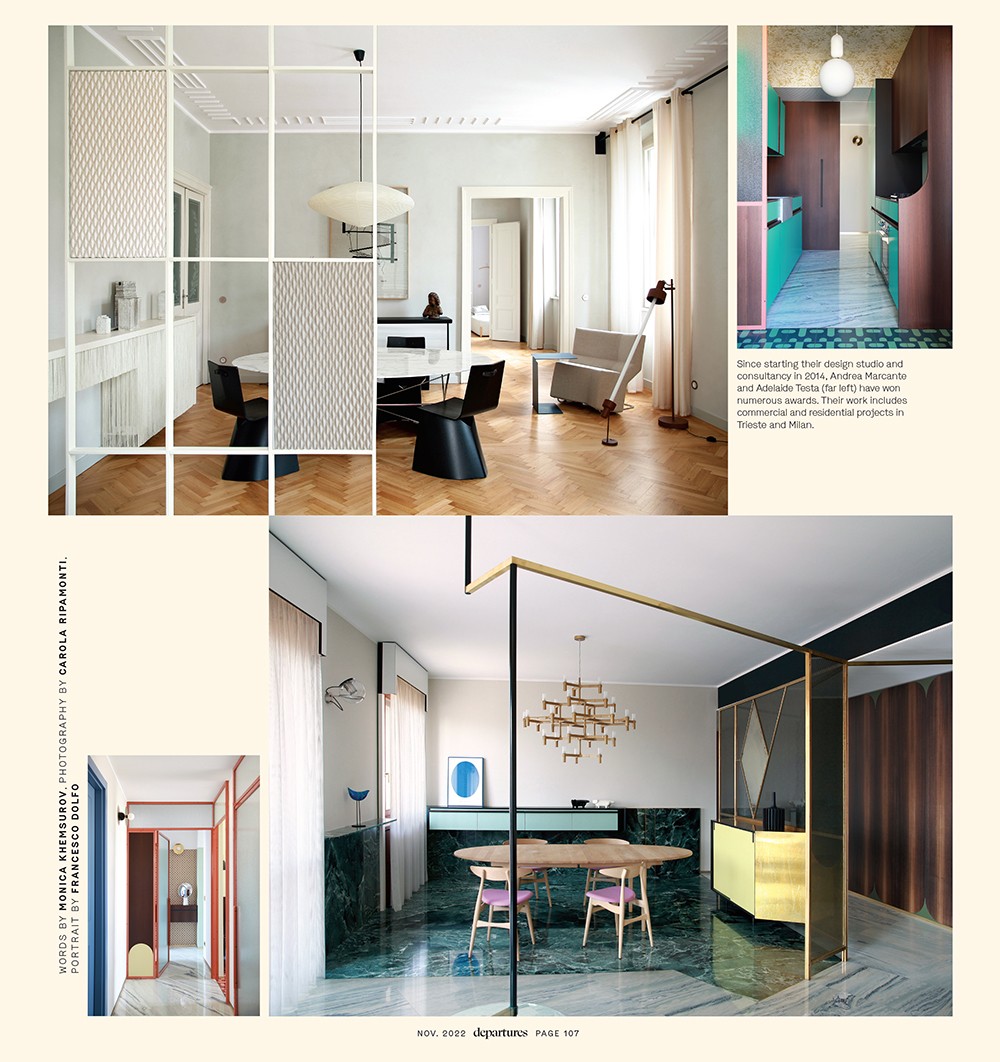 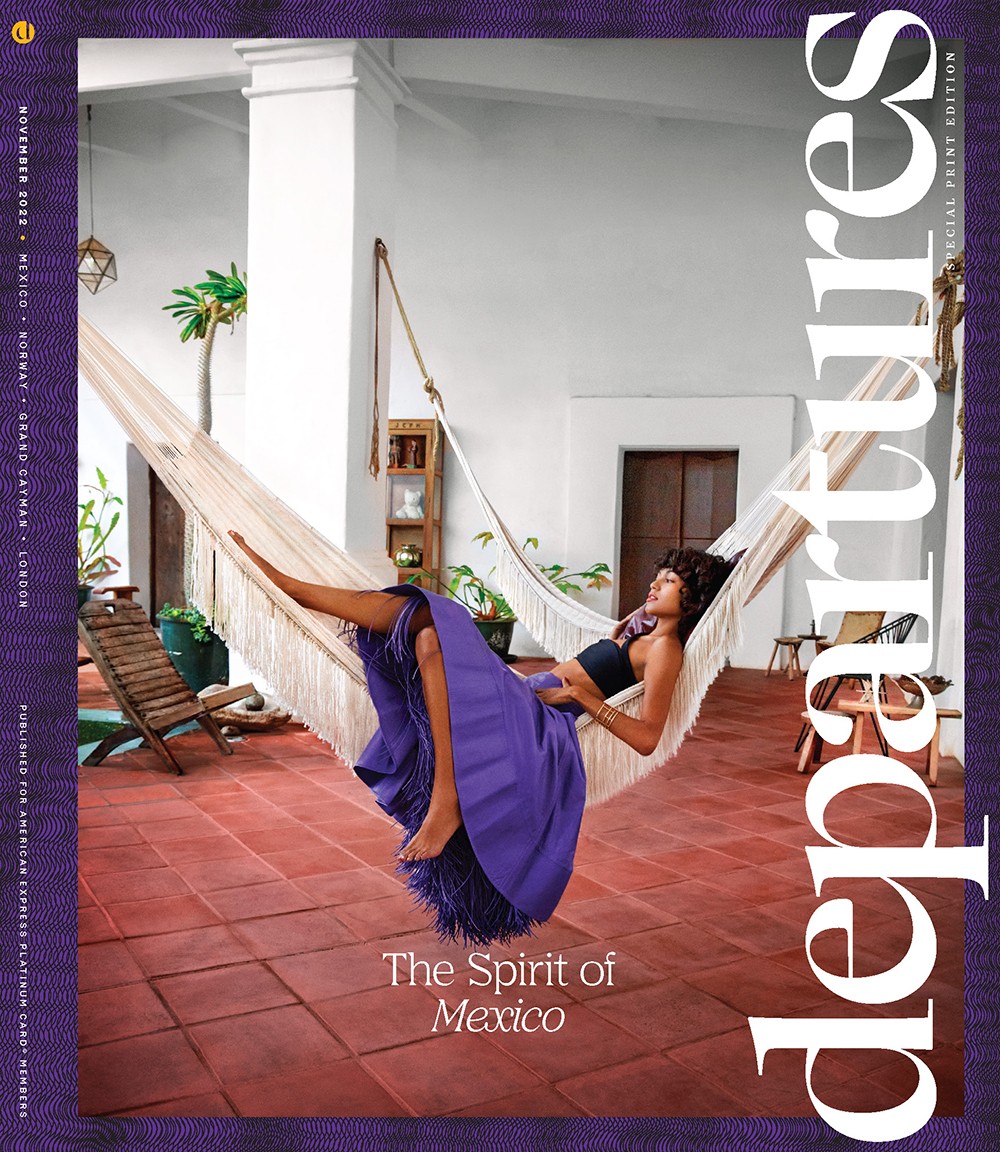 For much of the past decade, the interiors world has been obsessed with the sophisticated glamour of Italian modernism, which spanned from the 1930s to the 1970s. Think furniture by Gio Ponti or Gabriella Crespi, lots of lacquered wood and marble, and the iconic style of architect Piero Portaluppi’s Villa Necchi Campiglio, best known as the backdrop to the film “I Am Love.”
That is in part why the Turin-based design firm Marcante-Testa has been in such high demand since it was founded in 2014 by architect Andrea Marcante and interior designer Adelaide Testa. The pair often pay homage to Italy’s decorative history in their projects and are known for their respect¬ful renovations of period apartments that take pains to preserve original details, whether they be incredible midcentury furnishings or kitschy flowered tiles.
And yet, if you’ve ever come across one of Marcante- Testa’s eye-catching spaces on Instagram or in a maga¬zine, you’ll know there’s something entirely unique about their approach in the way they interweave those relics of the past with contemporary materials and techniques — pairing, say, antique mirrors and richly aged brass with lemon-yellow laminate to create a high-low effect. Or using their signature boldly colored metal frames to line doorways and delineate spaces, as well as to help soften the contrast between original interior elements and new ones. They also custom design much of the furniture and lighting in their projects. For them, it’s not about faith¬fully recreating the aesthetic of la dolce vita, but finding a way to bring it into the present. “When we see these projects filled with amazing furniture from the ’50s and ’60s, it’s beautiful, but it’s not a contemporary approach,” says Marcante. “There’s no idea behind it. It stays on the surface.
On the other hand, he and Testa’s work is driven exclu¬sively by ideas, the biggest being their research into how design can enhance feelings of comfort and well-being. One of the ways they do so is through ceiling ornamenta¬tion — adding patterned reliefs to the ceilings of the living rooms they design to recall the way such decorations were once used to convey the otherworldly and divine. But in a larger sense, they believe memory is what gives people comfort, both on a collective cultural scale and on an individual scale — which is why the past plays such a large role in their interiors. “We’re trying to understand the meaning of feeling at home,” says Testa. “For each client, we try to determine what that meaning is and put it into the project.”
In 2017, for example, Marcante-Testa was hired by a young man who wanted to reclaim his childhood home in northern Italy, which belonged to his parents and his grandparents before him. It was a messy patchwork of styles from the last century, including a lot of pain¬fully mismatched wallpapers and tiles. So the designers used playful color blocking and framing, like a bright red wall panel with a circular cutout around a particularly old-fashioned sconce, to honor the memories of the home and the family while giving it structure and a point of view. The majority of their clients may come to them with spaces that have a history, says Testa, “but in the end, they find something completely new