“Architects  Adelaide Testa and Andrea Marcante redesign the interior of a Milan home.

They transform it into a refuge a world away from work woes.

Colour, decorations, an airiness that lifts all modern-day pressures.  Like the Jacques Tati classic film” 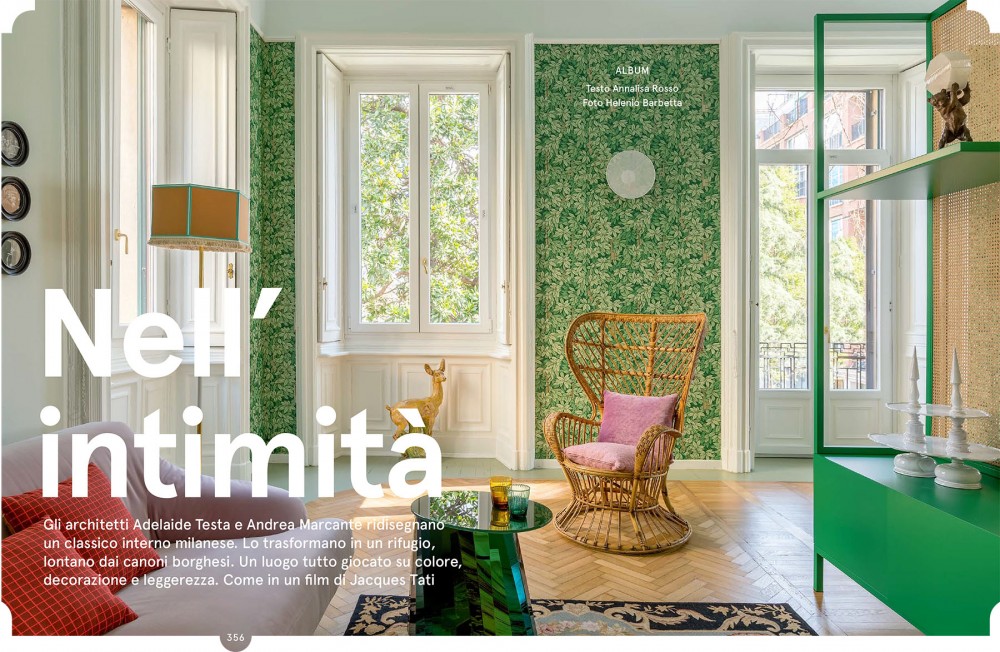 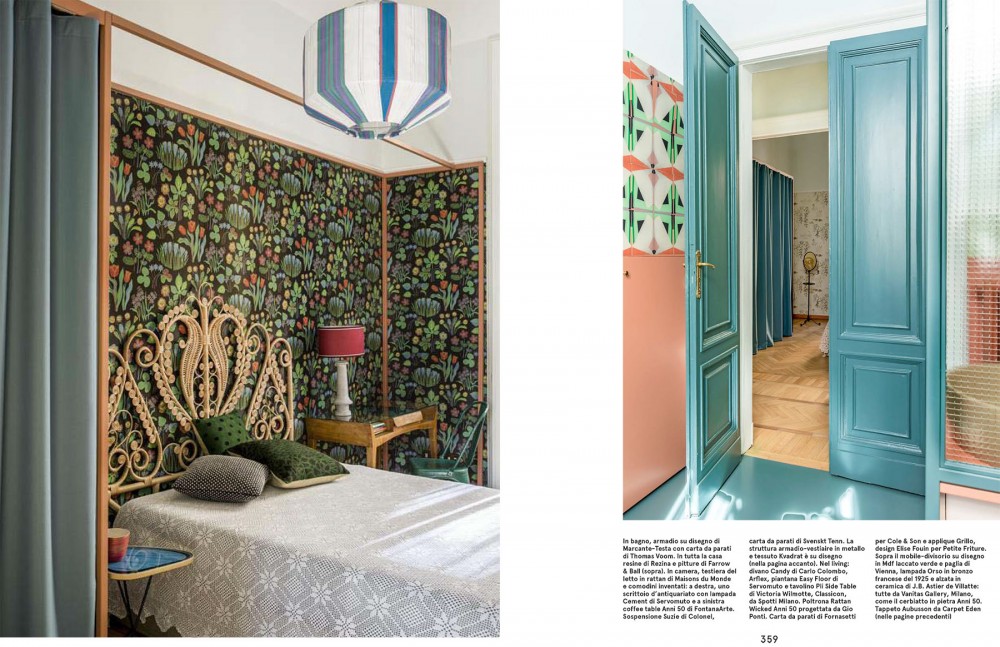 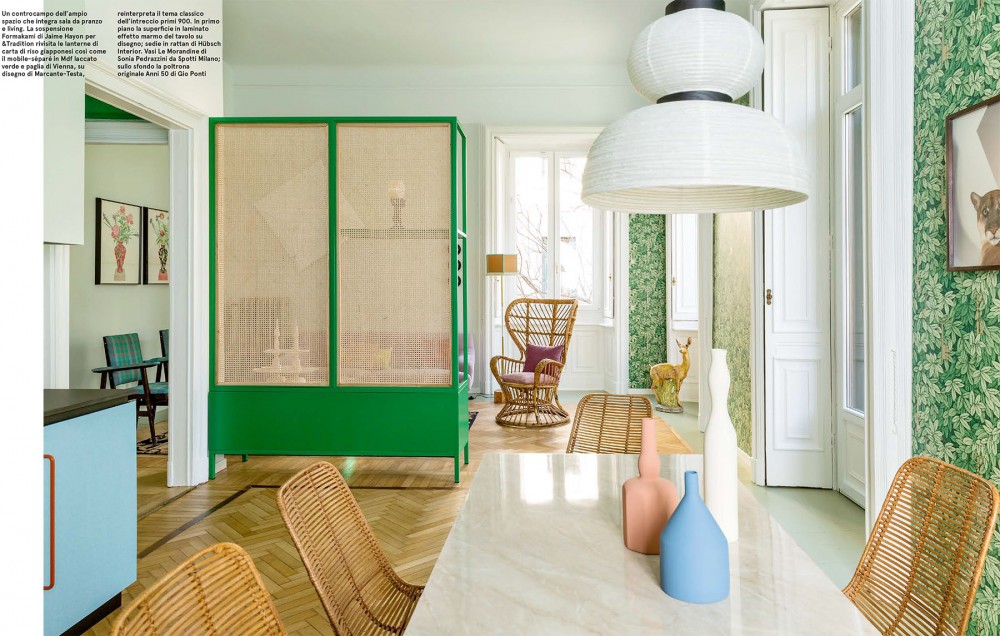 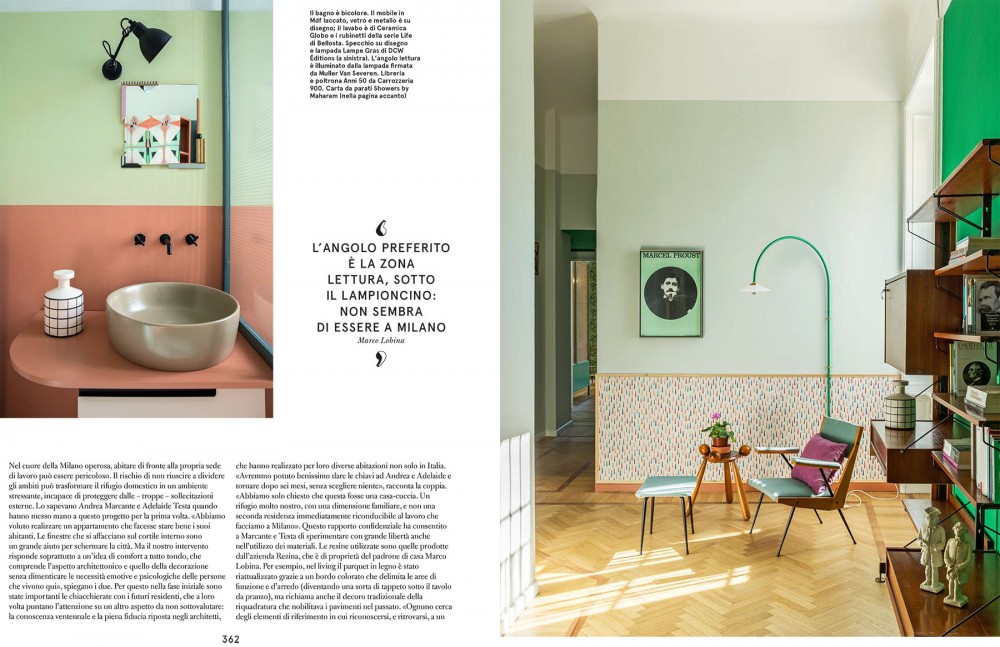 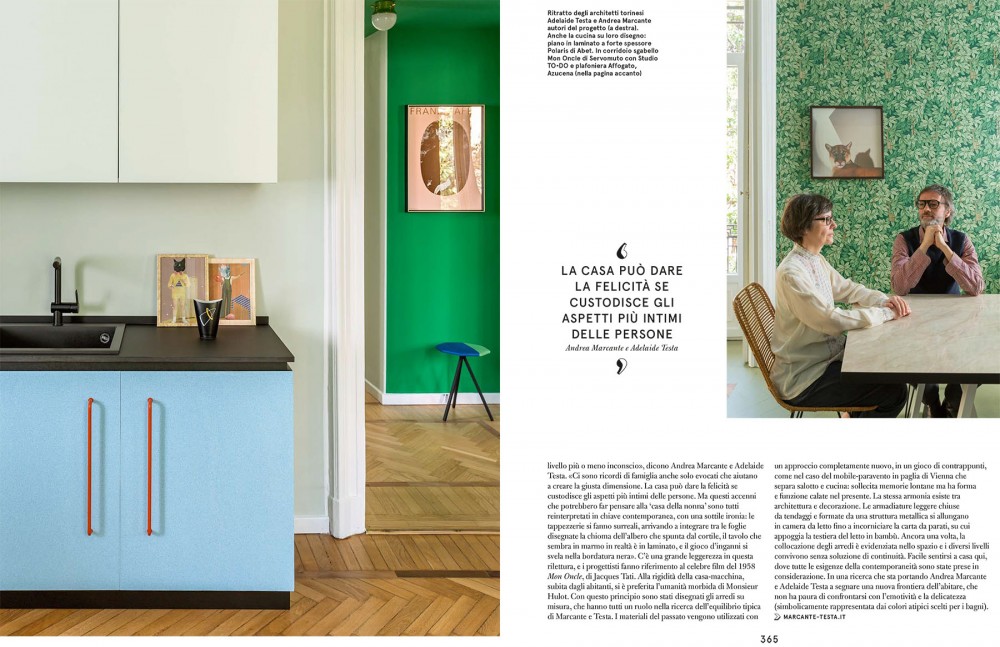 Choosing to live in front of your place of work in the heart of Milan’s business district has its risks. The danger lies in not bieng able to separate work and home, transforming your safe haven into a bunker, continually bombarded by work stress and demands. When Andrea Marcante and Adelaide Testa of UdA Architects accepted this apartment renovation, they understood the peril of these worlds colliding. 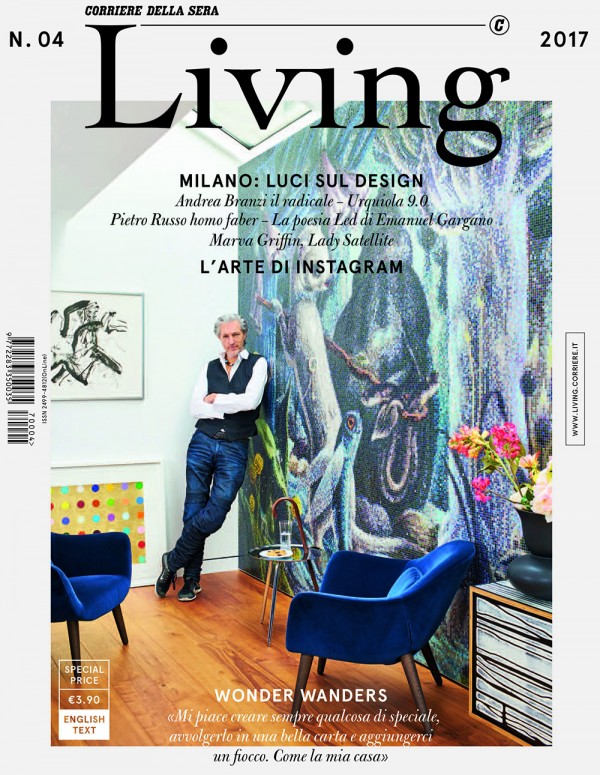 «We wanted to create an apartment where the residents would be happy – said Marcante – The courtyard-facing windows help to shield the space from the city. But, in particular, our work was centred on creating an all-around comfortable environment, which includes the architectural and decorative elements and meeting the emotional and psychological needs of the people who live here.”

Thus, in the beginning stages, conversation with their clients were important. The future residents, in turn, had already considered other aspects that weren’t minor. They’ve all known each other for two decades and the architects have already worked on the couple’s other homes, and not just in Italy.

“We could have easily given the keys to Andrea and Adelaide and returned six months later without selecting a single thing” one half of the couple confessed. “The only request we made was that they create a home-retreat. A sanctuary that’s very much our own, family friendly, and not simply a second home easily accomodating for our work in Milan”.

This confidence allowed Marcante and Testa to also freely experiment with materials. They bought their resins from Rezina, a company owned by the apartment’s owner, Marco Lobina. In the living room, the wood parquet floors have been rejuvenated with a coloured border, separating the functional and aestethic, a sort of carpet under the dining room table. But this touch also evokes traditional framing that adorned flooring in the past.

“Everyone looks for familiar aspects, even unconsciously” Marcante said.  “Family memories, even if simply elicited, help create the right atmosphere. A home can make us happy if it holds what is dearest, most personal to us. But such elements that might bring to mind your grandmother’s home are reinterpreted in a contemporary light with a touch of irony. The leafy wallpaper seems to surreally weave into the crown of the tree in the courtyard; the table that looks like marble is actually laminated, the secret revealed in its black border.”

A warm, light-hearted reinterpretation of home, one that the designers compare to Mon Oncle, Jacques Tati’s 1958 famous film satirizing modern architecture and technology. Instead of the superficially stylish, high-tech home where the residents are never comfortable, they opted for the human warmth of Monsieur Hulot. This was the thinking behind the furniture which plays an important role in Marcante and Testa’s signature equilibrium.

Old-fashioned materials are used in a completely new way, a study in contrasts, as in the case of the cane screen separating the living room and kitchen. It evokes distant memories but has a form and function firmly planted in the present. The same harmony exists between architecture and decor. In the bedroom, the lightweight wardrobe with a metal structure and curtains creates a frame on the wallpapered wall on which the bamboo headboard rests.

As is typical of this duo, the space highlights the different furniture arrangements and offers different coexising levels without the need for a commond thread. It’s easy to feel at home here where all the creature comforts were taken into account.

Andrea Marcante and Adelaide Testa of UdA Architects are pioneers, heading down a path towards a new living frontier. It’s one that doesn’t fear confronting emotions or subtleties (represented symbolically in their atypical colour choices for the bathrooms).