Cinedora is a multifunctional space designed by the architecture firm Marcante-Testa, for film post-production and their promotion. The project is located in Rome at Rione Monti, a favorite district of filmmakers (especially Mario Monicelli) due to its antiquated, special, almost village-like atmosphere of days gone by. A place where time seems to stand still, offering a location for many films that have made the history of cinema, from Lina Wertmuller to Gianni Amelio and Woody Allen.

The designers’ objective, in agreement with the Cinedora film production company which commissioned the project, was to recover some abandoned spaces just a few dozen meters away from the Colosseum, with a dual intention: on the one hand, to offer very sophisticated spaces from a technical standpoint for film post-production in the heart of the city, and at the same time to open a place of cultural exchange on new film productions in Rome.

“Cinema is a circus”,  said Federico Fellini, a director who saw the world of the circus as a key to represent a fundamentally fantastic and bizarre but exceptionally brilliant reality, which in certain ways is still conveyed by Rione Monti.

This bond between one of the most famous Italian directors and the circus provides the cue for the project by Marcante-Testa, particularly in the first spaces, which are more open to the neighborhood. The entrance leads to a small café with a few tables, where visitors become the actors and spectators of a setting whose playful, circus-like atmosphere blends with colors and materials that suggest the typical image of Italian cafés in the 1960s.

The large chandeliers reference the typical lights of dressing rooms, and seem to perform like acrobats in space, in the midst of a grid of metal structures that also form the furnishings of the small café counter, all the way to the storage elements. “Drapes” in perforated sheet metal underscore the festive atmosphere while the colors and materials, such as the cementina tiles on the floor, embody the appeal of a period in Italian history where new features boldly interacted with the historical city. The niche seats against the wall and windows, like the chairs and tables, bring out the convivial character of the space, while the visuals emphasize the contrast between the city of stone and memory, and the impromptu transience of a movie set.

The successive spaces are more clearly formulated as a workplace; the references to the circus and playful atmospheres continue in the architecture, as underlined by the “festoon” design of the green volume that incorporates the restroom, and in the design of the accessories, such as the cork panels utilized for the display of cinema memorabilia and materials on new productions.

The innermost zone of the project is a small screening room with about 50 seats, for audio post-production equipped with mix room, audio editing room, sound design and video editing room.

Cinedora has been configured as a place not only to “see” but also and above all to “make” cinema.

Custom made furniture designed by Marcante-Testa and realized by Falegnameria Fiore. 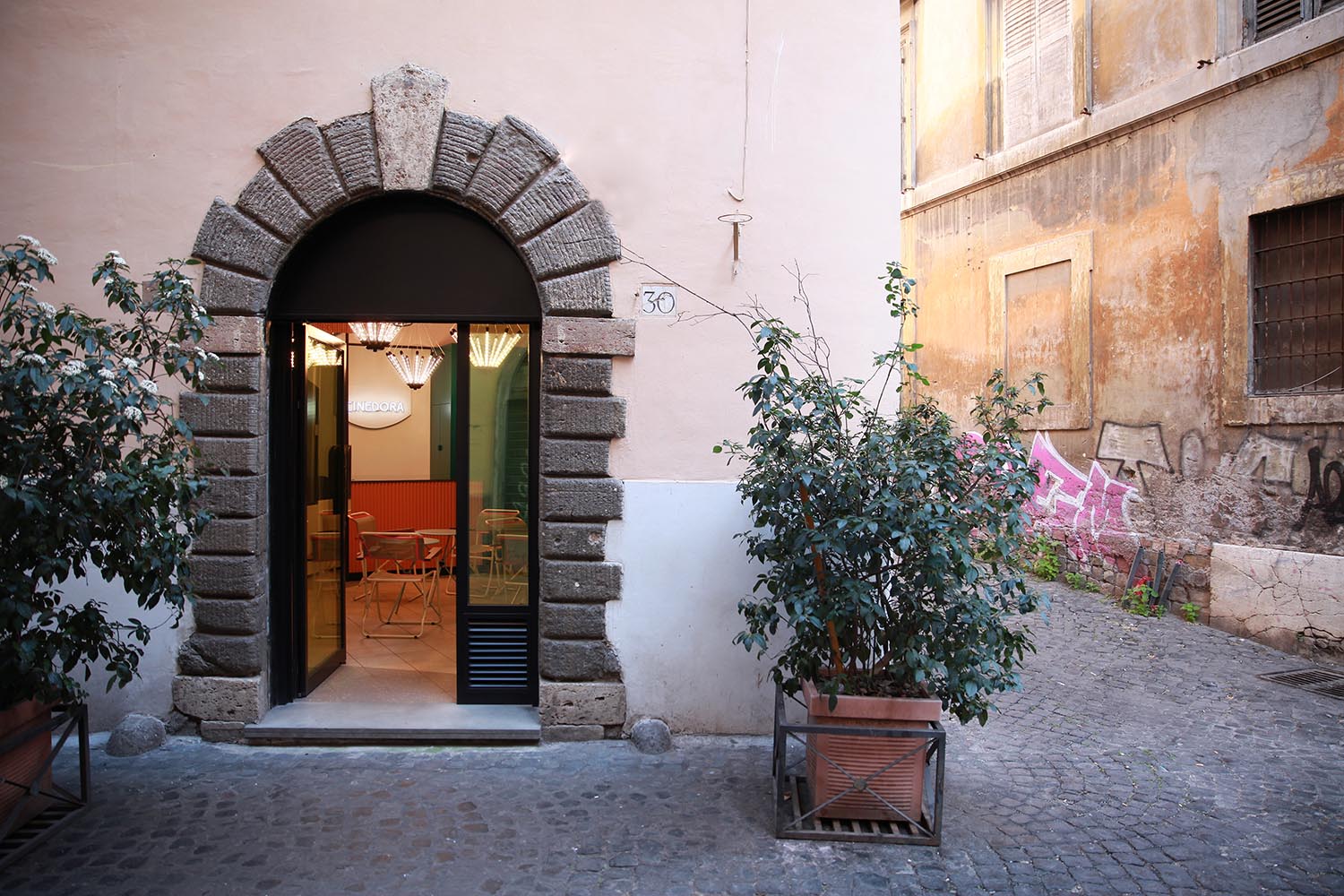 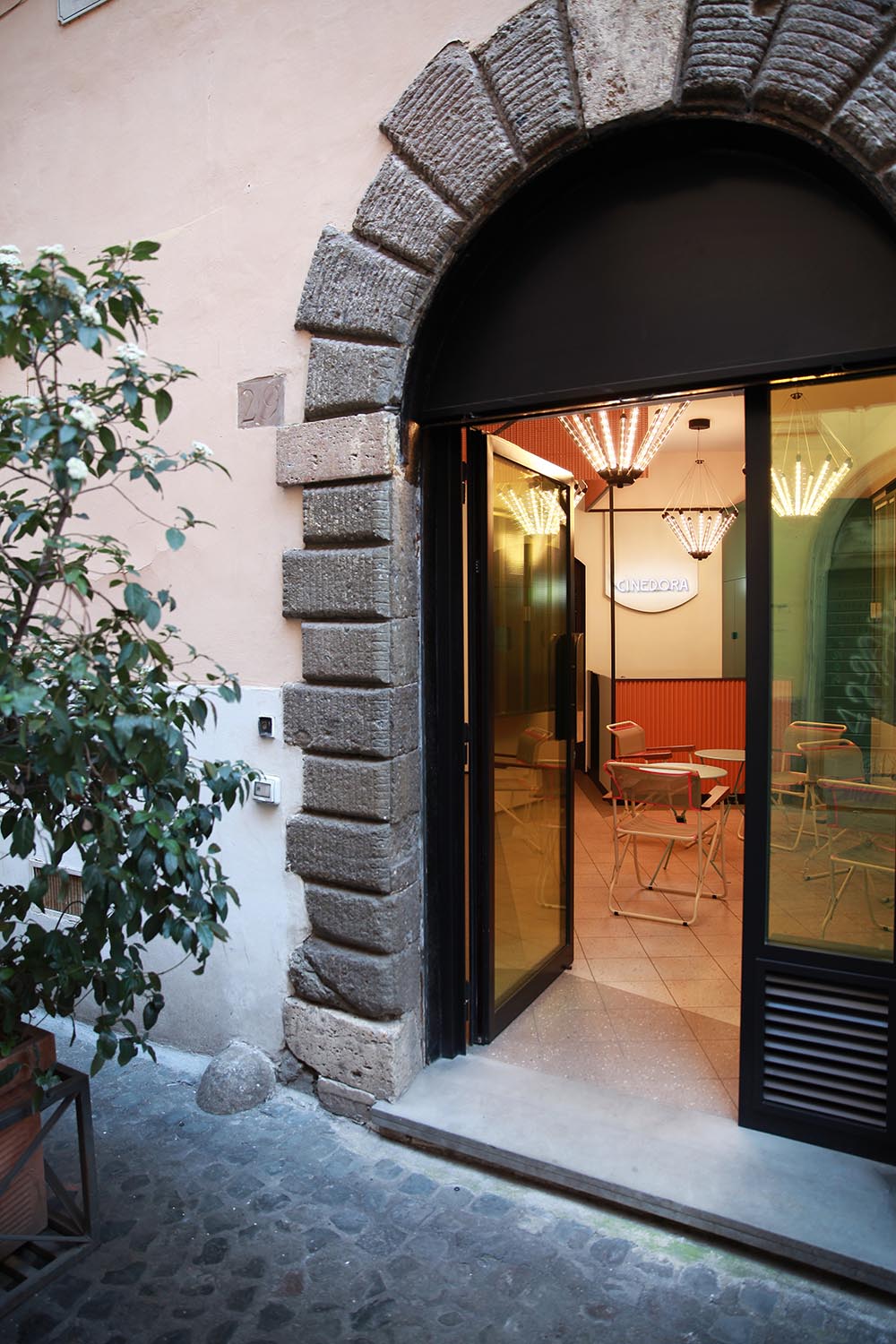 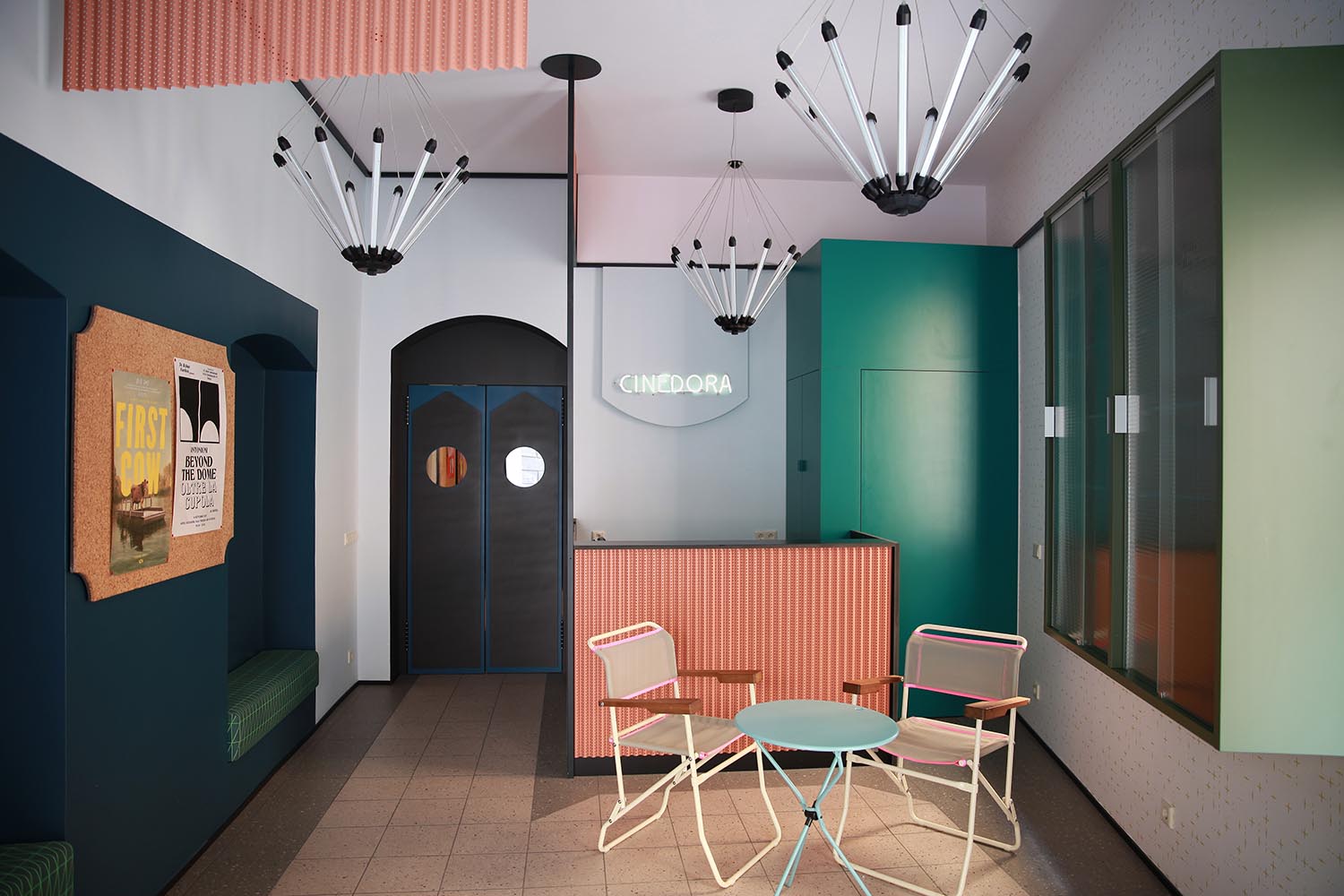 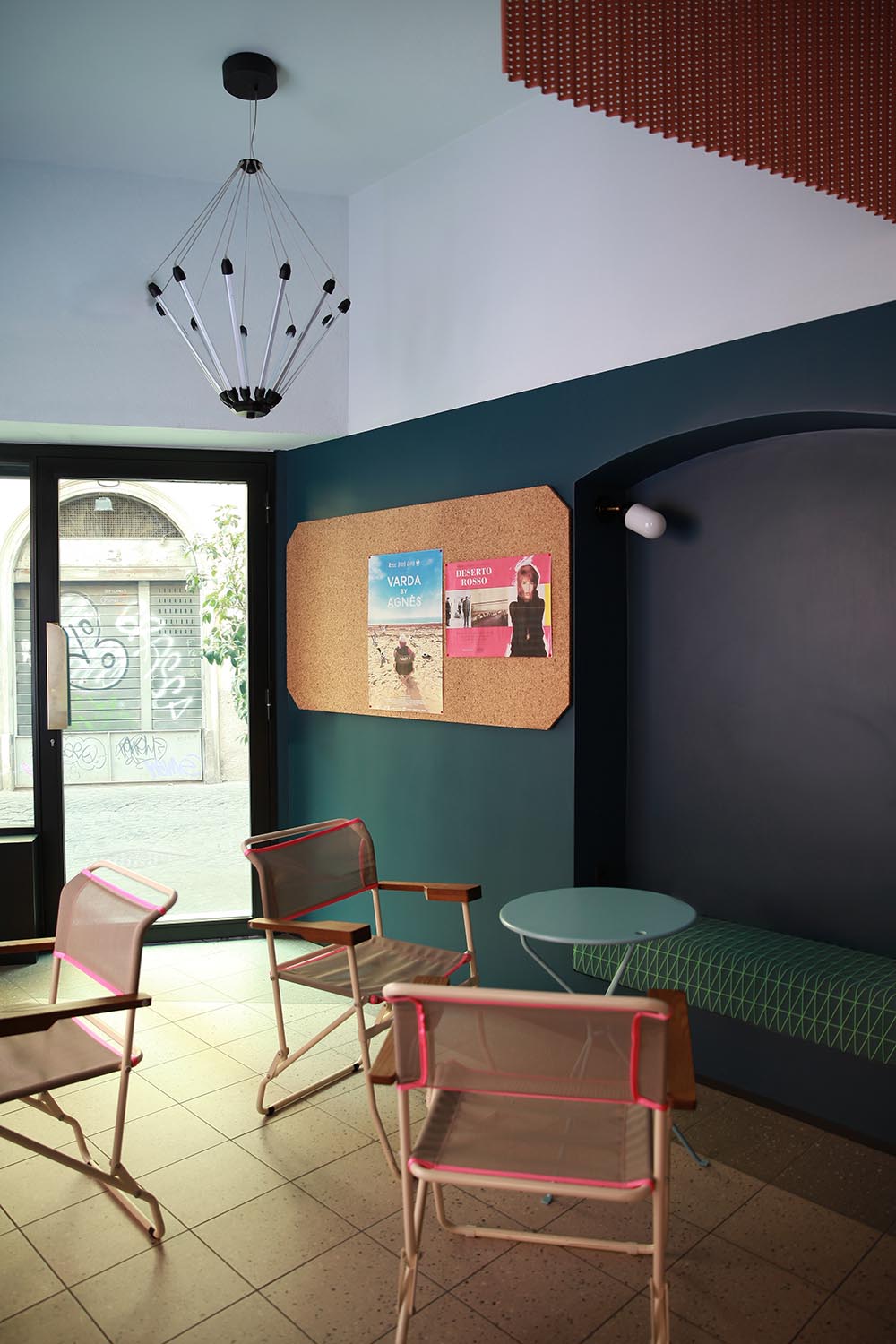 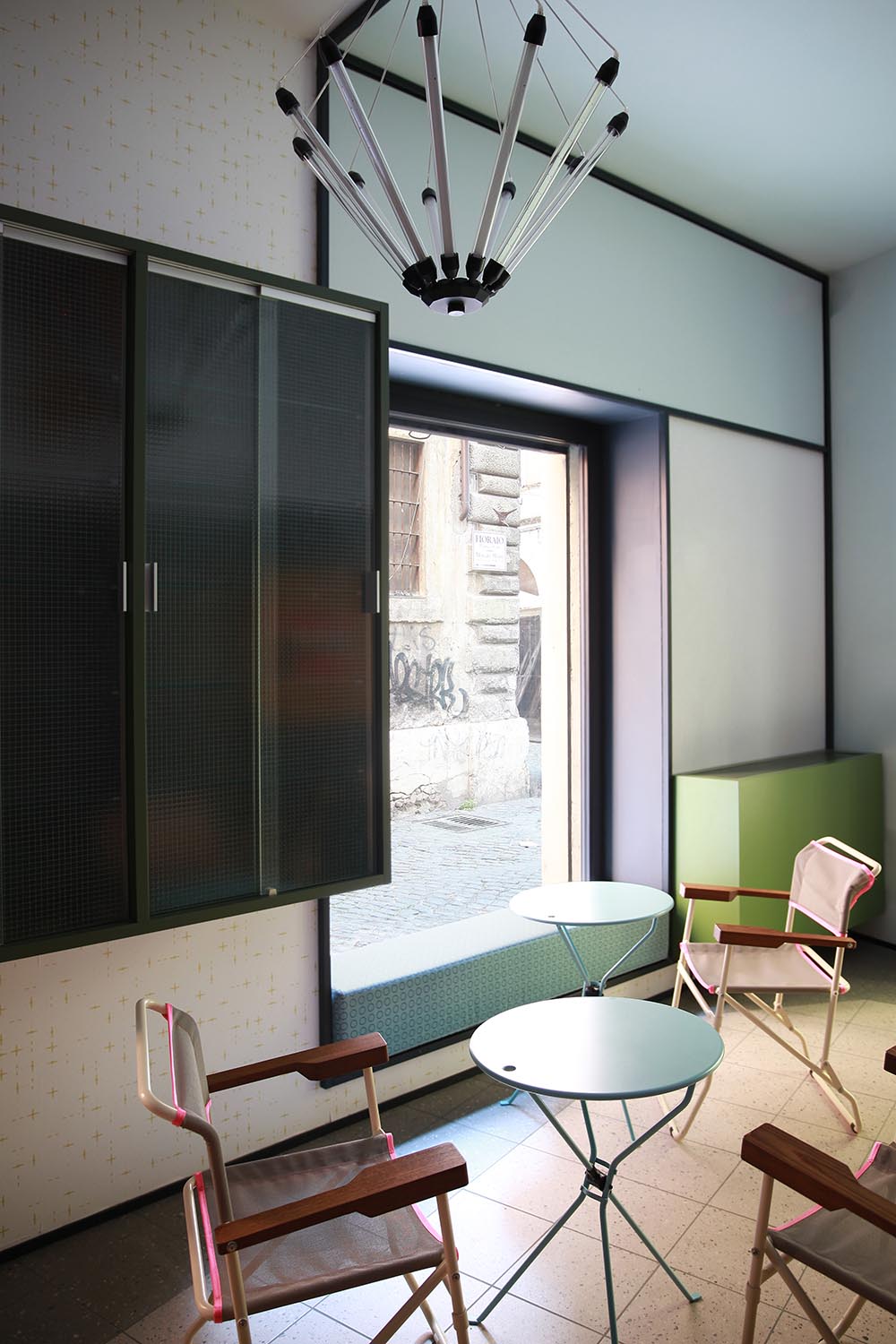 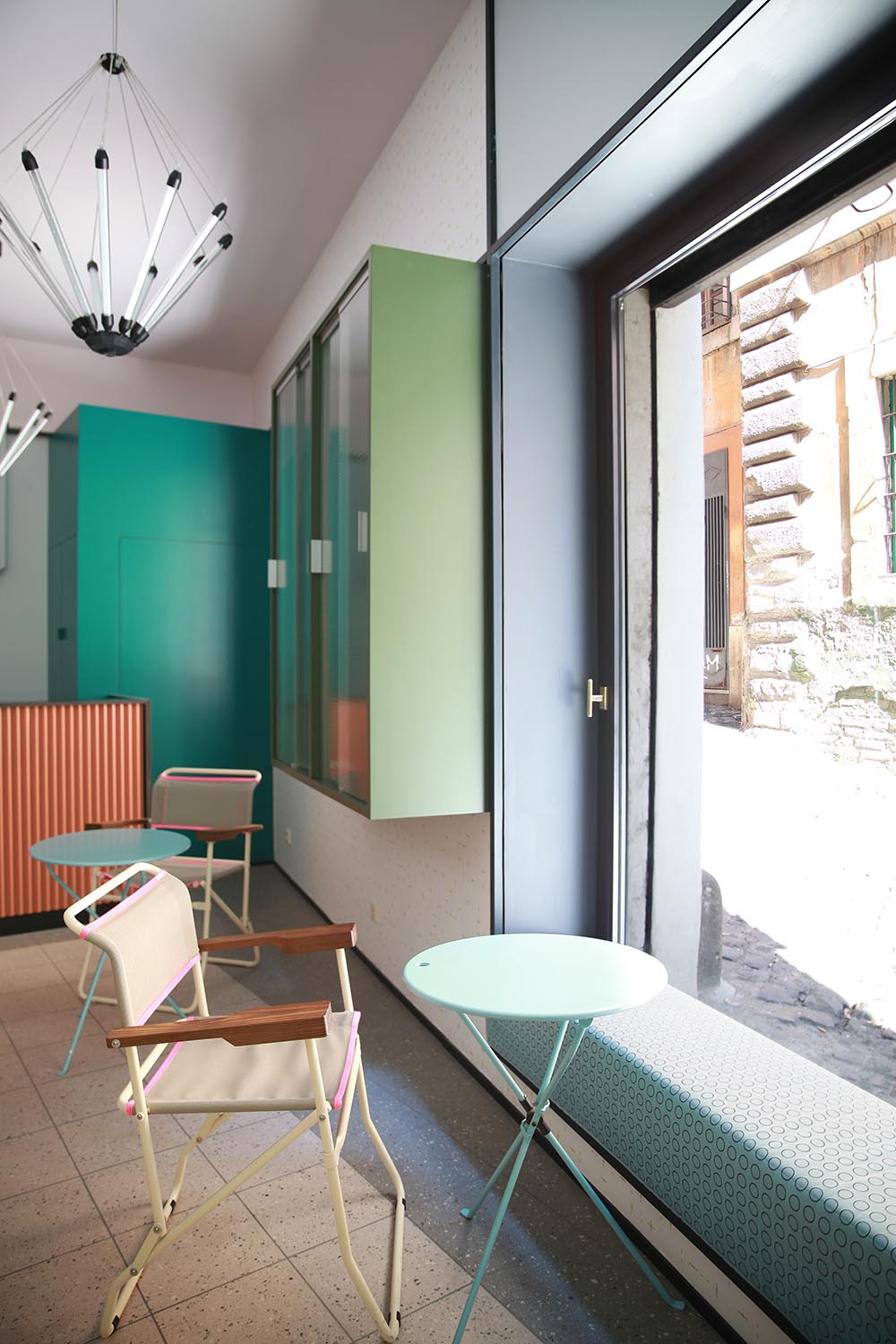 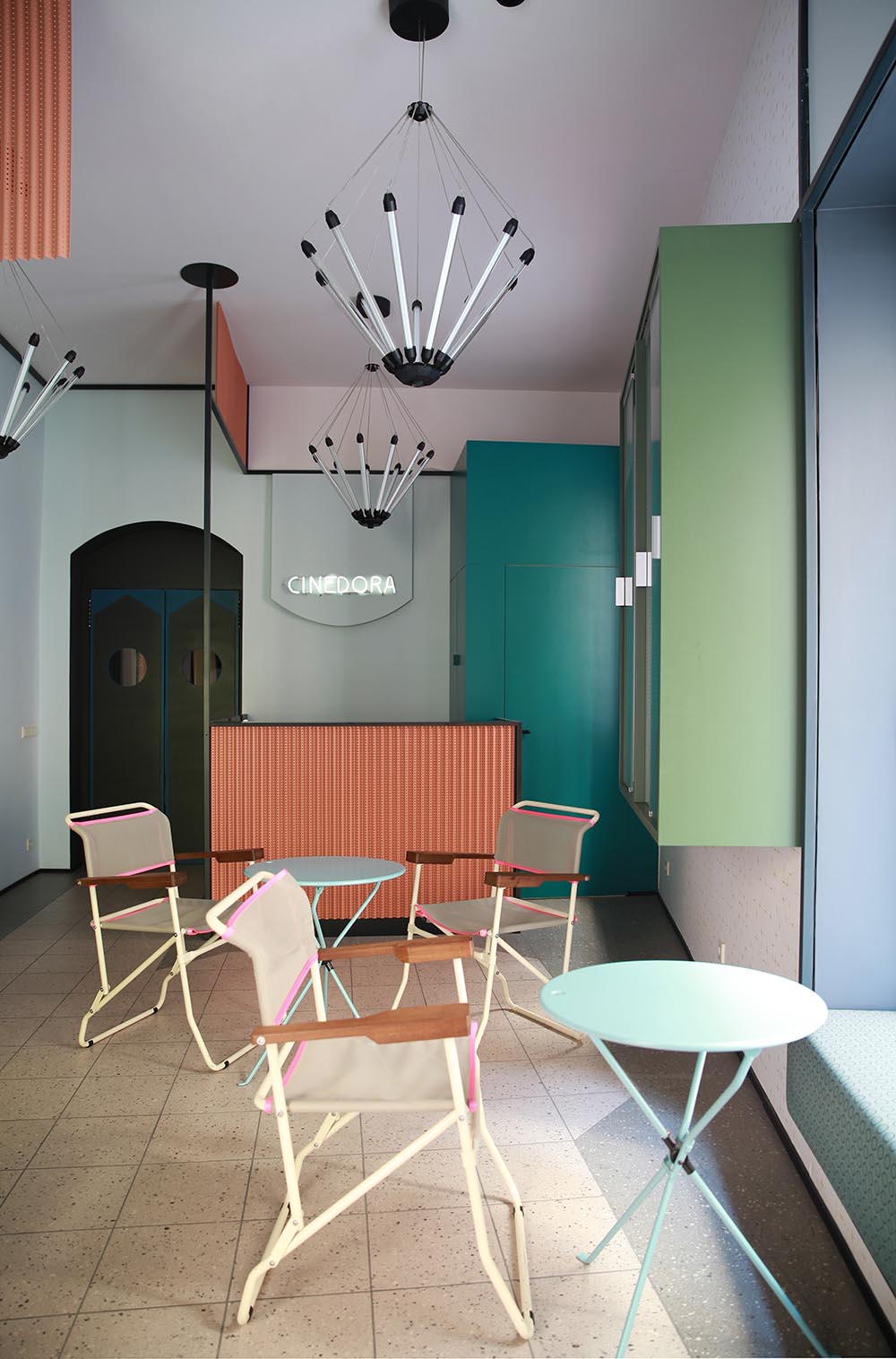 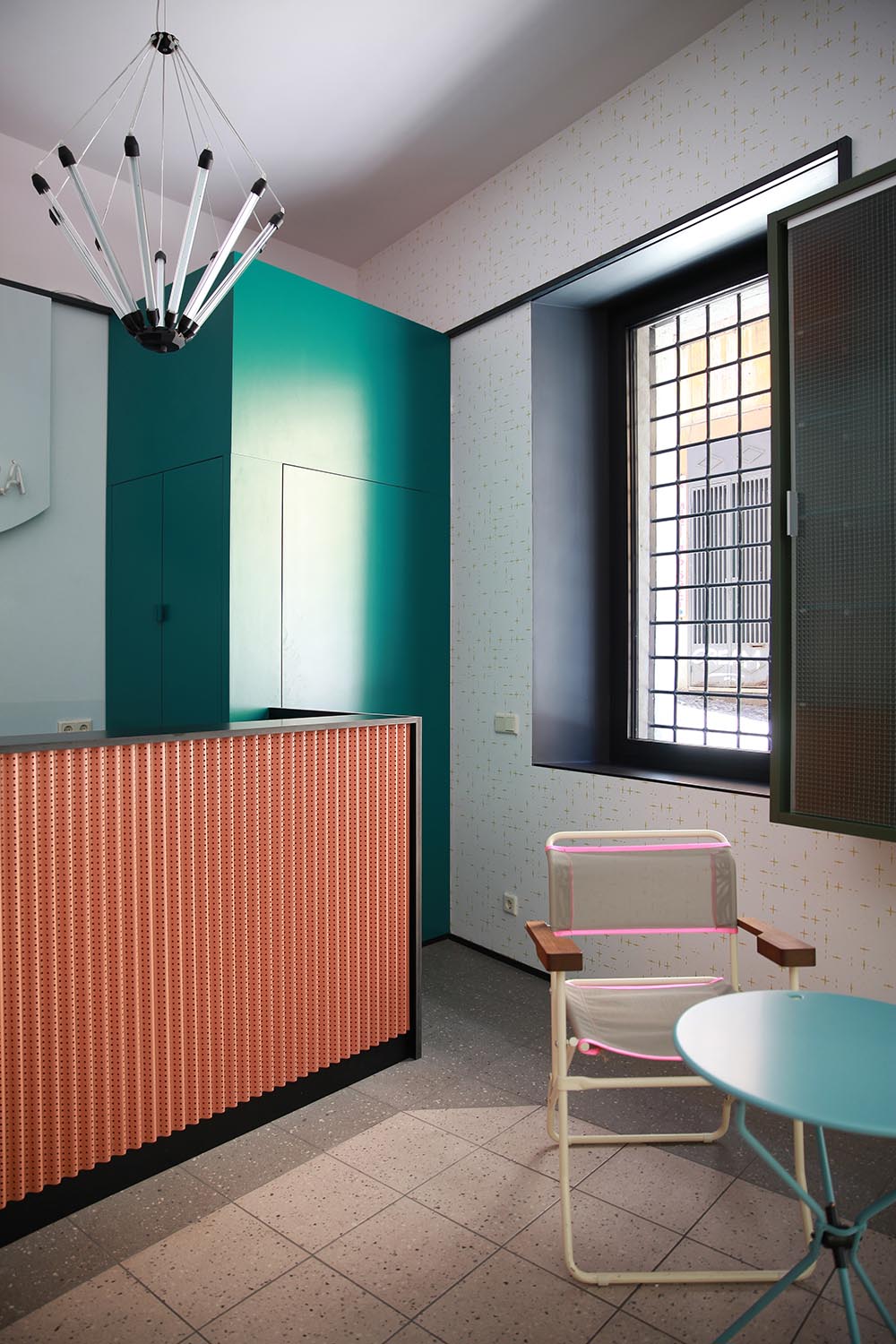 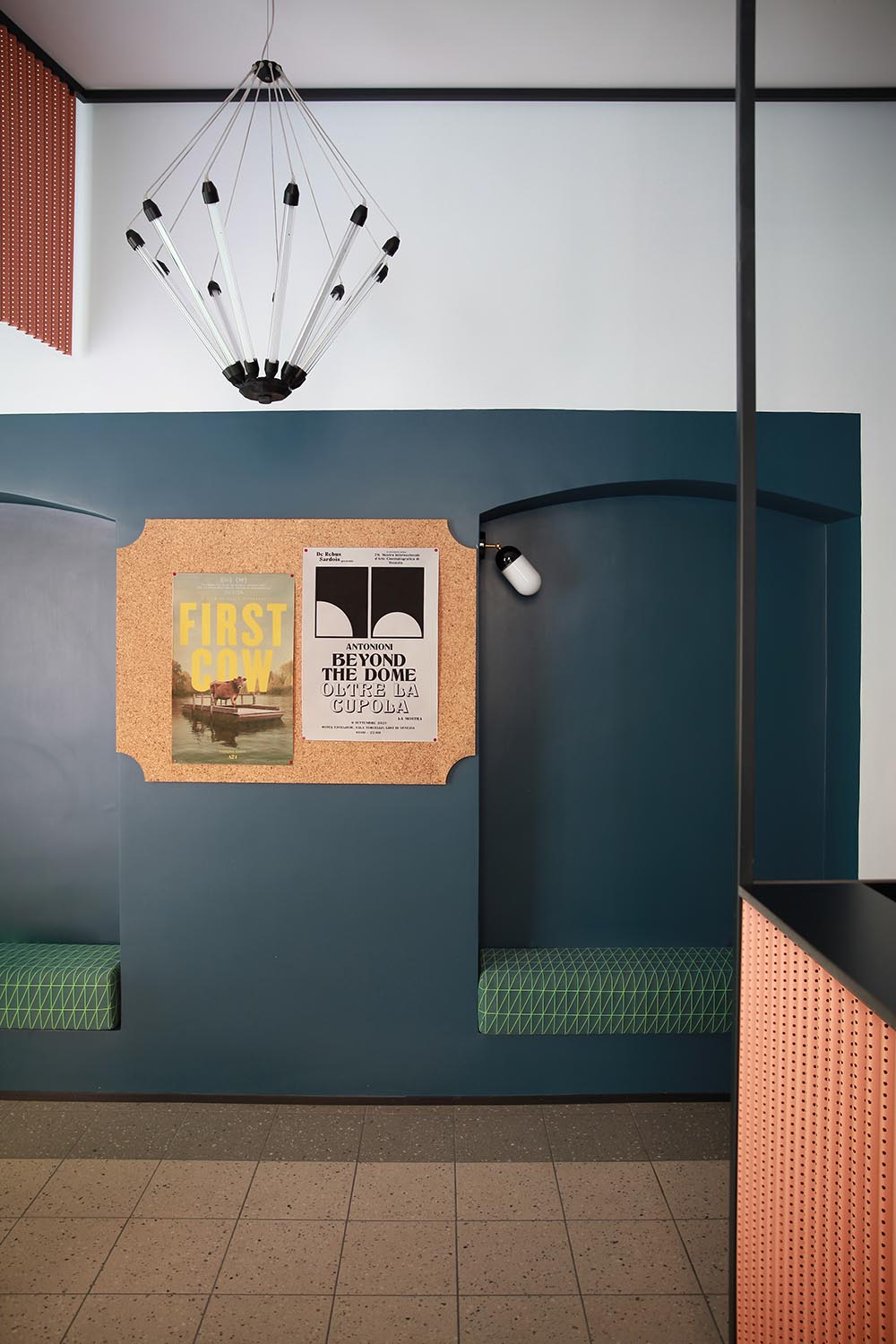 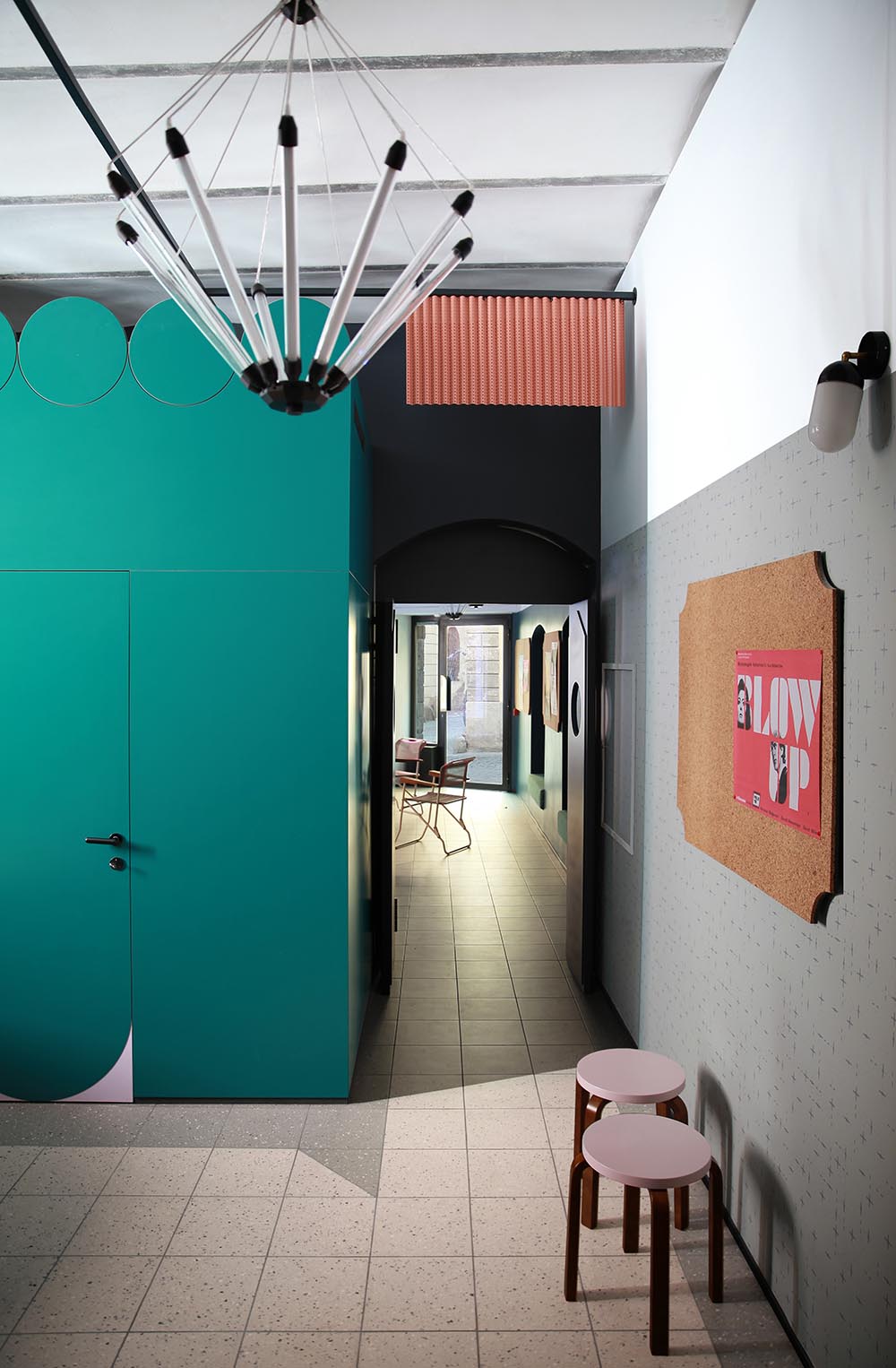 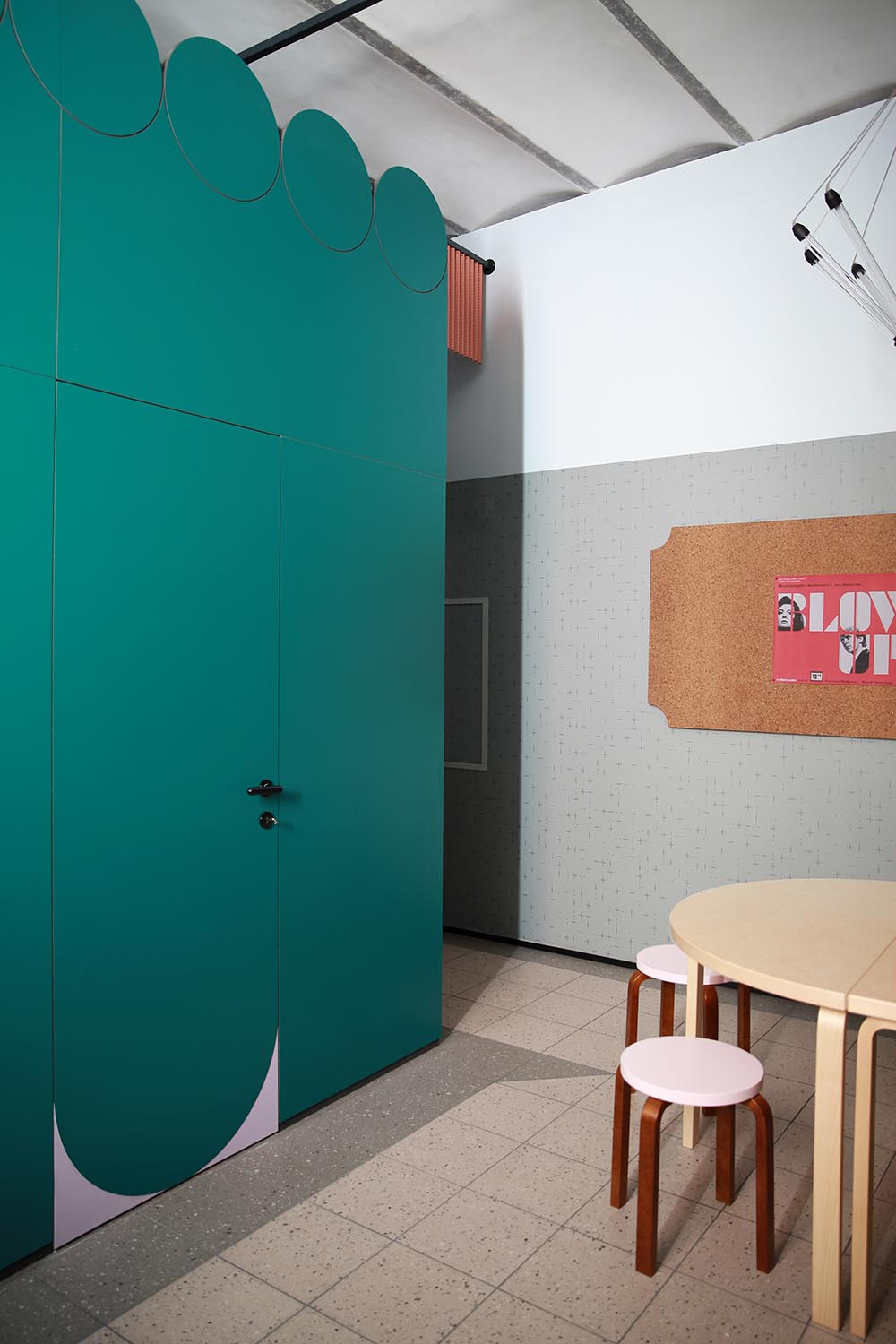 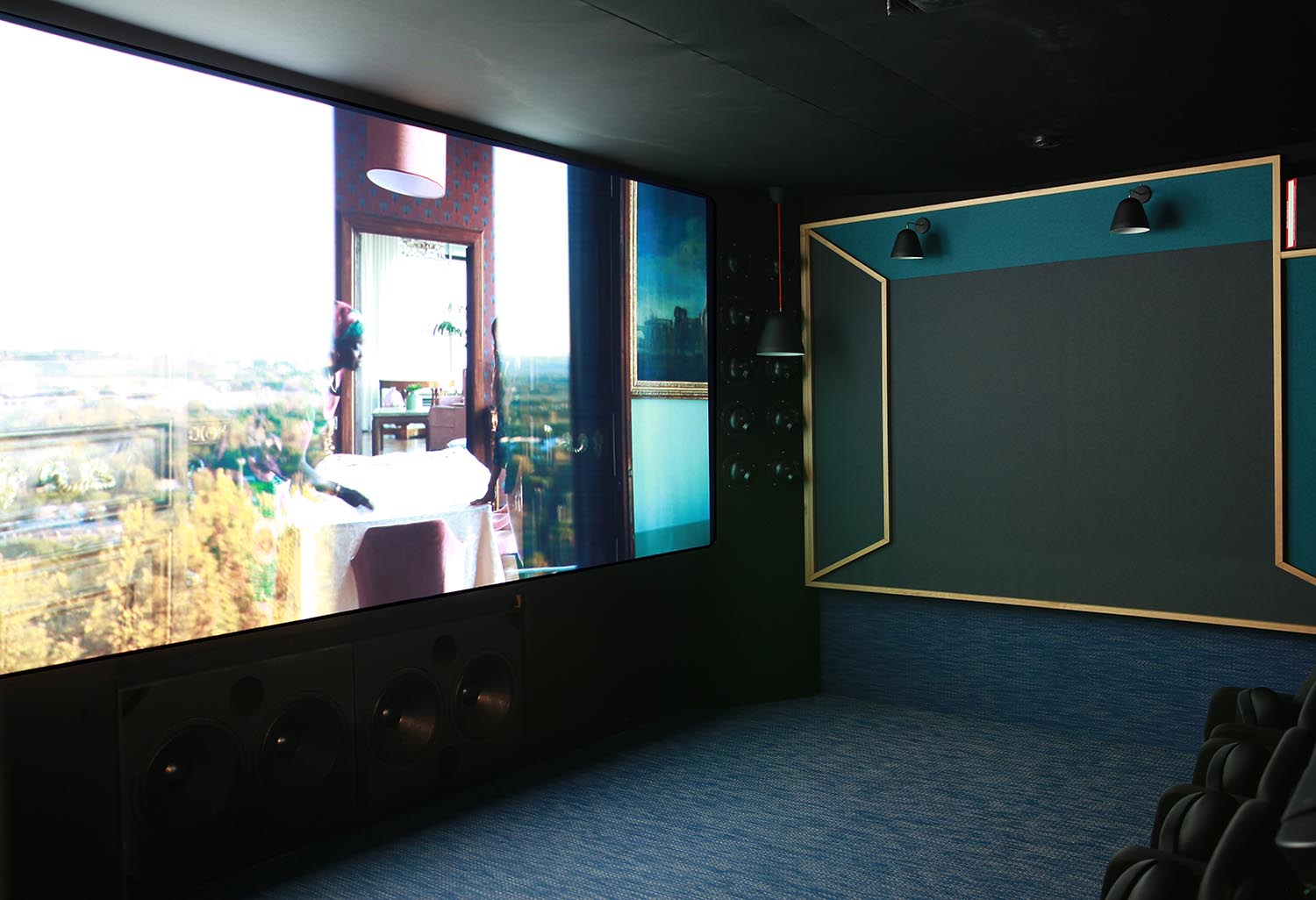 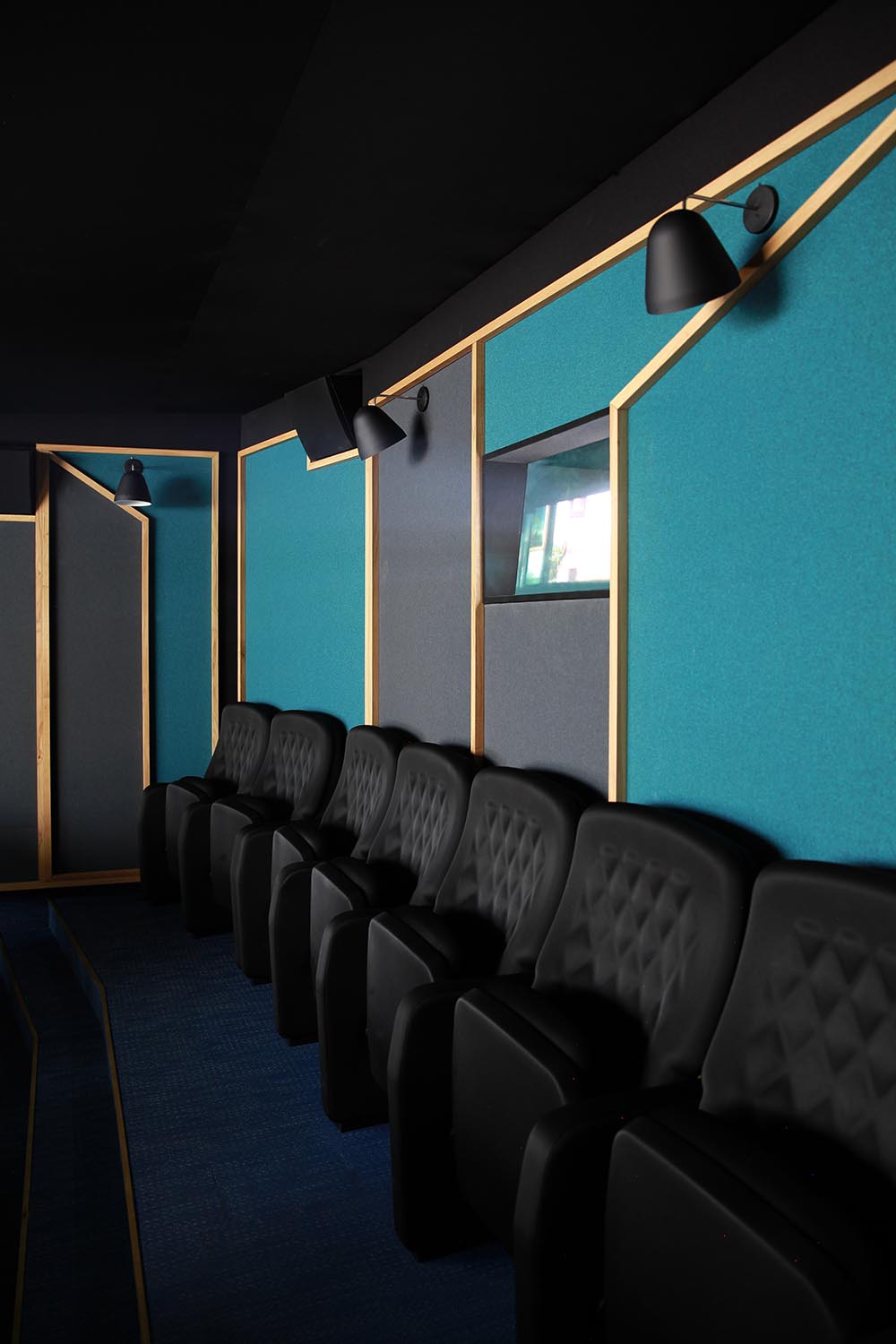 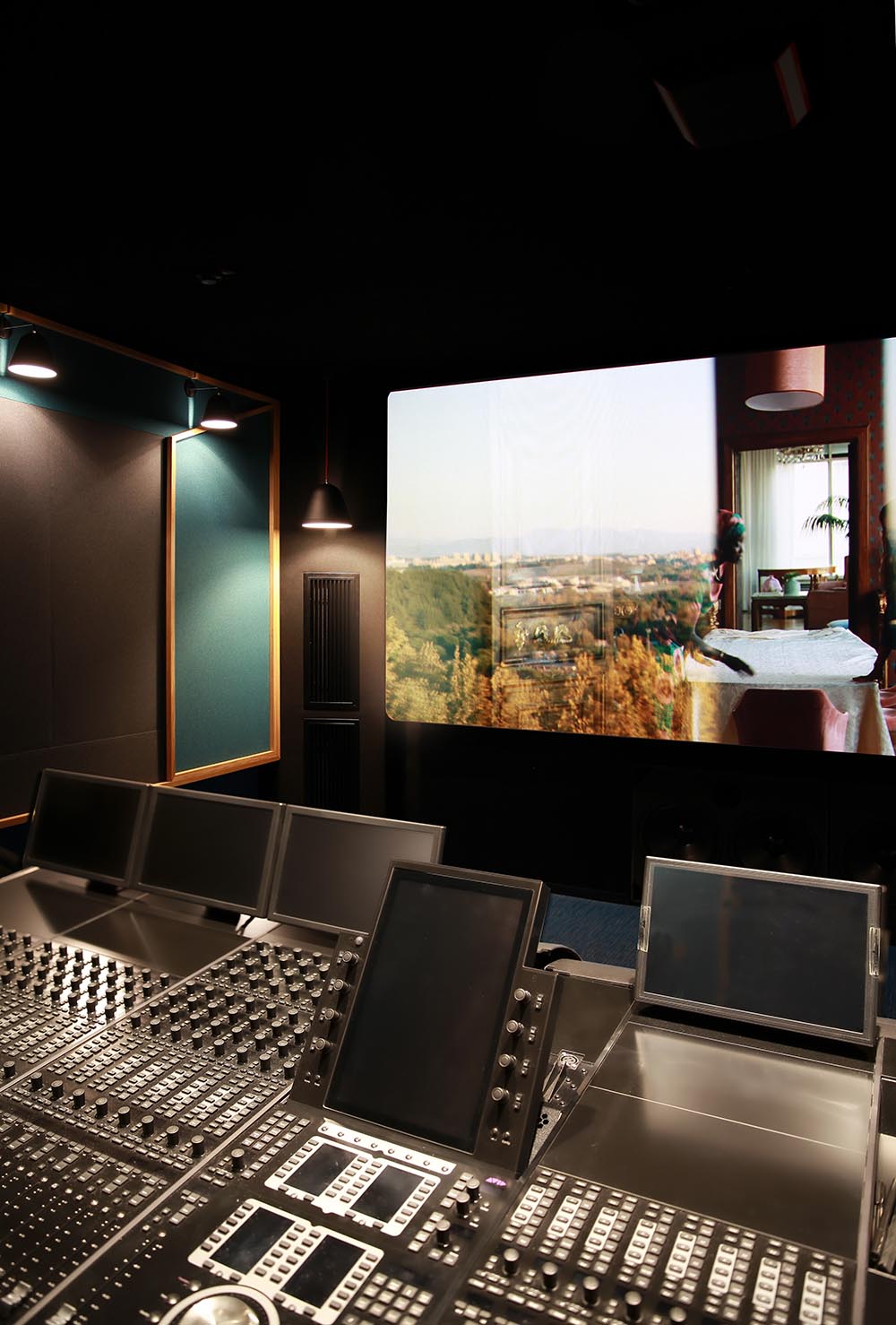 A MATTER OF TASTE
By continuing to browse the site you are agreeing to our use of cookies.